In September of 1867 Captain Benjamin Stevens opened a General Store, and Timber operation in Augusta, Mississippi, the location of the largest Government Land Grant office East of the Mississippi River. Captain Stevens began his timber operation purchasing land and rafting Virgin Pine Logs down the Leaf and Pascagoula Rivers to sawmills located on the Mississippi Gulf Coast. The location of his store was about one mile from the present Georgia Pacific Leaf River Pulp Mill.

In 1904 Captain Stevens and a son, C. H. Stevens moved the store and timber operations to Richton, Mississippi to be located on the newly constructed railroad extending from Mobile, Alabama to Jackson, Tennessee. Ben M. Stevens, Sr., grandson of Captain Benjamin Stevens became owner in the early twenties and changed the company name to B. M. Stevens Company. In April of 1926 B. M. Stevens, Sr. was returning from a business trip and nearly collided with a truck hauling peeled logs headed to Laurel. After stopping too see if the driver was okay, he discovered that the logs were to be delivered to a Mr. Mason who was trying to make a wallboard from wood chips that were being sold under the name Masonite. Mr. Stevens developed a friendship with Mr. Mason and later shipped the first Rail Car of pulpwood to the new Masonite mill in Laurel, Mississippi. As Masonite grew, so did the B.M. Stevens Company timber operation, becoming for over fifty years the largest supplier of pulpwood to Masonite. 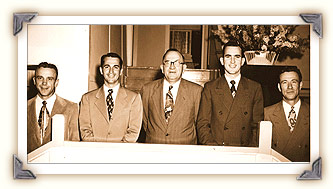 In 1933 the Richton Tie & Timber Company was organized in order to separate the expanding timber operation from the retail store. As other family members, Ben M. Stevens Jr., Henry Stevens, Forrest Stevens and D. O. Thoms came into the business, a sawmill, a building supply business and timberlands were added to the growing operation. Building new relationships with other companies, Richton Tie and Timber gradually began supplying timber products to other mills in Mississippi, Louisiana and Alabama. In March 1999 the company name was changed to Richton Tie & Timber, LLC. Benjamin M. Stevens III and Richard H. Thoms, Great, Great, Grandsons of the founder, Captain Benjamin Stevens became the owners of the company.

The company is continuing its’ leadership role in the forestry procurement business and constantly strives to develop new opportunities. With experience in building and operating a contract chip mill for Georgia Pacific and the addition in 2000 of Real Estate Brokerage Services, Richton Tie & Timber is positioning itself for a new wave of opportunities in the South.